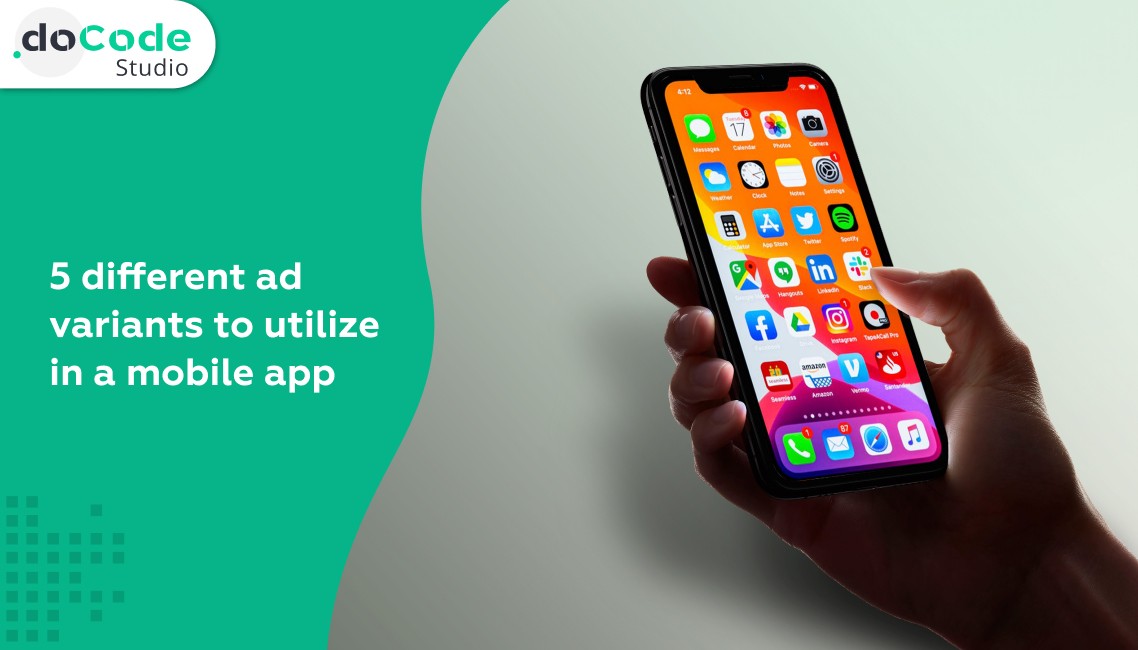 Advertising in mobile applications is a powerful driver of development for any business. Accurate targeting and geo-positioning, high visibility rates, the absence of ad blockers - all this only confirms the relevance of its use. Placing advertisements for goods and services in mobile applications requires a separate approach and its own advertising campaign. Simple duplication of contextual advertising for display on mobile devices is ineffective.

Today, the mobile application industry is developing rapidly. Every year people spend more and more time on their mobile devices, and applications take up the bulk of it – about 89%. This makes them especially attractive to advertisers. In-app advertising in mobile applications is a powerful driver of development for any business. Accurate targeting and geo-positioning, high visibility rates, the absence of ad blockers – all this only confirms the relevance of its use.

So, let’s take a look at the types of advertising in applications using examples.

Rewarded Video is a type of in-app advertising that presupposes a reward for watching videos. Blocks are embedded in the content of the application or are placed on top of it.

Typically, such an ad is shown in online games and encourages you to view it for additional bonuses, lives, hints, in-game currency, etc. Such advertising does not irritate users, since the choice – to watch or not to watch – is their only. Rewarded video ensures high engagement: the desire to receive a reward motivates users to watch the video to the end.

Native ads are built-in ad units masquerading as a mobile app design. They look like part of the interface or content. For example, they may be presented in the form of recommendations, a post in a news feed, a video on Instagram Stories, etc. However, such messages do not violate the user’s comfort zone. Native ads are considered by many to be the best mobile ad format due to their high conversion rates, since many users don’t realize they are ads.

Banner advertising is the main advertising format. It represents blocks of graphics, video, or text that appear on the screen of the gadget while using the application. Banners can be of 15 formats and 80 sizes.

The cost of banner advertising is relatively low, but when choosing this format, you should pay attention to high-quality creative design. Practice shows that expandable banners are the most effective. They do not annoy users, since they are always minimized (you need to tap on them). Moreover, such banners give a good conversion: they are viewed only by interested users.

Interstitial is a full-screen advertisement that is displayed in the interval between a user requesting information and receiving it (for example, when moving to the next level of the game). It can be either a static banner or a video. Such an ad is hard to miss: it completely overlaps the screen, restricting access to the application interface.

Interstitial comes in two types: Video and Rich. In the first case, a person can close the advertisement after a certain time, in the second one, a person is forced to watch to the end. That is why Rich is especially annoying for many.

Playable ads are fully interactive ads that offer to play a “microgame” and take targeted action, for example, go to a store or install an application. In Playable ads, an attention-grabbing game piece and a call to action at the end are essential.

The emphasis is on excitement and curiosity. To prevent advertising from turning into just expensive entertainment and for it to generate high conversions, you should thoroughly test the final message.

Pros and cons of in-app advertising on mobile apps

Mobile marketing is becoming a trend among business owners because of the new opportunities it opens up for them. Its popularity is supported by an impressive list of benefits:

The main disadvantage of advertising in mobile applications is that leaders have long been identified in this market – services of well-known companies and brands, social networks, and instant messengers. Advertising on unpopular apps doesn’t make sense. Another disadvantage is the complexity of scaling. While advertisers often use automated ad buying, popular ad networks have their own ad formats that require specialized training.

Also, the disadvantages include the annoying effect of some types of advertising. In this case, some users may develop a not-too-loyal attitude towards the company. To avoid this, you will need professional help.

Placing advertisements for goods and services in mobile applications requires a separate approach and its own advertising campaign. Simple duplication of contextual advertising for display on mobile devices is ineffective.

Mobile apps have their own ad formats and display scenarios that need to be considered. Define your target audience, choose an advertising channel and format, use modern methods of user engagement and you will get the result you wanted.

CPO Viktoriia Mykhalchuk "I like to focus on small details in my work, the big results depend on how you do small things."
Article tags:
Read More